Hair Loss Due To A Fungal Infection

Hair Loss Due To A Fungal Infection

With all the stresses of modern life there are a myriad of catalysts for hair loss, and as a result, nailing down the cause can be more than a little difficult. Luckily, the subject of hair loss treatment is not considered as taboo as it once was, allowing research to progress and ensuring that all diagnoses are accurate enough for an effective treatment to be found – and this is especially true for fungal infections.

Hair loss due to a fungal infection or yeast infection on your head can lead to patchy – but temporary – hair loss across the scalp, eyebrows and eyelashes. More common in children than adults, these infections are easily dealt with thanks to topical or oral anti-fungal treatments.

What are fungal infections?

Fungus is all around us. It grows wherever the conditions fall within its comfort zone. The most common types of fungi are mushroom, pathogens, yeasts and mold. While there are certain outliers, the majority of fungi enjoy warm, moist environments – hence the presence of mold on the walls of houses that have a humidity problems and a lack of circulating air.

Despite its constant presence, fungi rarely affects our health. And when they do, it is often due to lifestyle choices that provide them with the conditions they need to survive. For example, athlete’s foot is extremely common for those who regularly take part in physically demanding activities which cause footwear to store moisture and allowing yeast to breed on the foot that occupies it.

How will I know if my hair loss is due to a fungal infection?

Any professional who has worked in hair care for a reasonable amount of time will undoubtedly be able to recognise the condition upon seeing it. However, fungal infections are a medical concern and so a trip to your GP to be formerly diagnosed is never a wasted journey.

The majority of those who do have a fungal infection on their head are more likely to be suffering from tinea capitis – a form of ringworm. While this fungal infection can be passed easily from person to person, those who have suffered from candidiasis – the more common yeast infection that leads to thrush of the mouth and groin – may find themselves more susceptible that others.

The symptoms of tinea capitis are as follows:

Another less common fungal infection that can affect hair loss is ‘piedra’ – or trichomycosis nodularis.

Common in humid countries such as Malaysia and the Southern US, piedra was once widely considered to be an attractive attribute for women. However, severe infections can lead to breakages resulting in hair loss similar to that of tinea capitis.

What is tinea capitis – or ringworm – and how does it cause hair loss due to a fungal infection?

It is important to mention at this point, that ringworm has nothing to do a worm or any other parasite. The infection is capable of penetrating hair shafts, weakening them and causing them to break off at the surface of the scalp and leave an unsightly aesthetic.

Tinea capitis is merely the name given to the fungal infection known as ringworm when it occurs on the head and scalp. Ringworm can occur anywhere on the body and is mainly transferred from person to person through physical contact. Children are especially susceptible to the condition as they tend to come into close contact with one another more often than adults.

While the most common cause of ringworm worldwide is the growth of the fungus microsporum audouinii, nine out of ten cases in the developed world are caused by the trichophyton genus of fungi, a mold that has numerous family members across the globe.

In the US and Latin American, the prevalent fungus that causes infections is trichophyton tonsurans. In the Middle East, the most common fungus is trichophyton violaceum, while in Europe and Northern Africa, trichophyton schoenleinii and trichophyton megninii are more likely to be the culprits.

How do I treat hair loss due to a fungal infection such as tinea capitis or piedra?

Luckily, these fungal infections are extremely easy to treat – especially if they are caught early.

With piedra, the easiest treatment is simply to shave the affected area and then use a combination of anti-fungal creams. With tinea capitis, however, the majority of cases can be treated without further loss of hair.

The following treatments are considered the best for ridding the scalp of tinea capitis:

There is little one can do to expediate the process of removing ringworm from your scalp, and so it is always important to do as much as you can to avoid the condition arising again.

If you are worried that you are suffering from hair loss due to a fungal infection, at the Hair Growth Studio, we will always be available to provide you with support as well as numerous effective therapies to help you recover. So, please book a consultation with the Hair Growth Studio if you’d like personally-tailored advice from an expert.

Please feel free to contact us to speak in confidence to a friendly member of our team. You can book a no obligation consultation, email us at lisa@hairgrowthstudio.co.uk or alternatively you can call us on 01706 620 353. 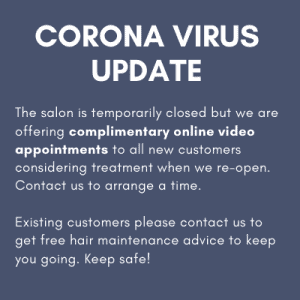